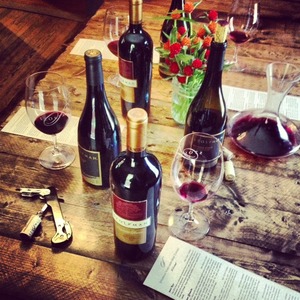 3 stories of metal racks rise from the concrete slab of the winery cold room extending to the insulated ceiling.  Each level supports tall stacks of cases.  The cataloged inventory stored neatly along the wall is referred to simply as “the library”.

The rack appears full, and at one point a few years ago, the library burst to the point we moved 6 pallets of wine up to our temperature controlled consolidation warehouse in Santa Maria.

Our goal, beginning with wine production in 1997, is to keep at least 10 cases of each wine we make.  These 10 cases allow us to routinely pop bottles and monitor how the wines age and evolve.  Since journalists and wine critics started taking note of Stolpman about a decade ago, the library allows us to put our money where our mouth is:

A journalist comes to the winery and tastes the potential of a newly bottled release.  Usually, the wine is still tight, and the flavors primary.  We explain that the wines are made naturally without manipulation or filtration, processes that make wines more approachable out of the chute.  We feel these modern techniques break down the integrity of the wine, and therefore we don’t employ them.  However, although tight now, the naturally “whole” wines enjoy extraordinarily long lives.  The second the writer expresses curiosity on how the juvenile wine will mature, we duck away into the cold room and return with a 10 year old release of the same wine.

As the vineyard has matured, we’ve added more wines to our offering, highlighting special blocks, and discovering new blends.  On any given year, we could be adding 150 cases, 1800 bottles, to the library.  As fervently as we attack depleting these old wines, there’s no way Dad, Sashi, Ruben, and the Passionistas can keep up with the depletion.

In 2010, we decided something had to be done.  We were once again bursting at the seams, the library spilled over into extra pallets tucked behind rows of barrels.  The newly added cases would need to be freighted to Santa Maria come harvest time to make way for grapes.  We were already spending thousands of dollars a year on cold storage up in Santa Maria.

Luckily, the solution was obvious.  All of these wines are more beautiful than when we released them, why hog them for ourselves and journalists?

We would share them with our wine club, and put a limited portion of each for sale.  The “Best of Stolpman” tasting series was born.

We love to host the tastings in the winery and on the vineyard, where we can obsessively control the shipping conditions.  Our first tasting was held in the cold room right underneath the library stacks.  We’ve then took the tastings down the 101 to Wine House in Los Angeles and the Wine Loft in Carlsbad.

Motivated by the thrilled responses of the past attendees, we’re continuing our “Best of Stolpman” Tastings this year.  Just to wet the palate, here are the tasting lists of years past: