All year I’ve been writing about Stolpman Vineyards from my subjective point of view. So, just days after picking the second lot of Syrah for Dragonette Cellars, I spoke with Dragonette winemaker Brandon Sparks-Gillis to hear his thoughts on Stolpman. I thought it would be nice to get some third party perspective, and hopefully I’ll be able to interview a couple other Stolpman fruit customers to get their insight into our terroir. 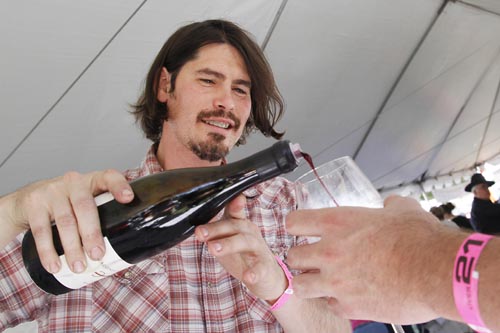 Brandon and I both worked in the Barossa Valley in 2006, and when I left for Chianti Classico, Brandon joined on at Sine Qua Non in Ventura to complete his double vintage year. The 2007 and 2008 vintages found Brandon learning about Biodynamic farming at Demetria Winery and finally in 2009, he converted to Dragonette’s full-time winemaking partner.

When Brandon called me in early 2009, the fruit contract negotiation went extremely smoothly. Brandon signed on for one acre of Originals Estrella River Clone Syrah in Block 5. Dragonette received the same acre in 2010 and both years the finished wine made the cut into the winery’s highest cuvee, MJM. Brandon thought back to those years and remembered the long growing seasons. New to the vineyard, he let the Syrah hang well until November both years, and feels his patience was rewarded when the fruit finally hit “the sweet spot” of ripeness just as the vines started to go dormant for the winter.

The 2011 April Frost decimated Block 5 Syrah, so I agreed to sell one ton from Block 6 to Brandon. 2011 would automatically be another late harvest as the crop was from the “second growth”. The Syrah vines budded a second time after the frost, a survival reaction to the death of the first growth.

Brandon loved the Block 6 fruit so much he talked me into getting it again this year. Brandon observed ideal consistency in every respect in 2012. We experienced a healthy set across the board and then even heat through the summer. Both factors created steady ripening. Therefore, Brandon picked the 2012 crop at least three weeks earlier than ever before. Brandon confessed that the 2012 season has been less nerve racking than usual, mainly because the heat events this fall have been less extreme than past years. He is confident that the 2011 and 2012 lots will once again make the cut for the MJM blend.

I asked Brandon how he would describe the Terroir of Stolpman, as he purchases fruit from quite a few other local vineyard sources. Brandon backed up to his experience trying Stolpman wines with John Dragonette in LA, and later at the Stolpman Tasting Room. Brandon says there is a common thread that runs through Stolpman Vineyards wines regardless of whether he is tasting L’Avion, any of the Syrahs, the Grenache, or the Sangiovese. Brandon called this “Stolpman’s Singular Voice”, a common tone that he seldom sees in other vineyards.

While this was very flattering, I had to ask the question, “why?”

Brandon took a deep breath – The following is my interpretation of Brandon’s answer:

In Santa Barbara County, we have an amazingly unique opportunity to pick grapes any time we want to. We get plenty of sunshine and no Autumn rain or subsequent mildew so we can pick over a months long period. This flexibility is one reason John, Steve, and Brandon chose this area.

Amplifying the natural leeway in picking time, almost all SBC vineyards irrigate, and the water keeps the vines healthy and green, sometimes all the way into December. Winemakers can take mid-harvest vacations and pick at will, based on whatever “style” they wish to exert over the vineyard. The resulting wines range anywhere between 12.5% and 16% alcohol. Too often, winemakers succumb to “the kid in the candy store” mentality. Just because an amazing level of ripeness can be achieved, doesn’t mean that one should wait until December every year to pick.

Even in the cooler climates in Santa Rita Hills, the high-octane style is easily achievable if one waits for further ripening. The peak heat in Santa Rita is less than Ballard Canyon, so the diurnal swing isn’t quite as extreme. The flavor profile in the Rhone varietals is therefore a bit more uniformly dark and lush. The same goes with the Los Alamos area. The best Rhone wines from Santa Rita produce floral wines with exotic perfume while just to the North in Los Alamos, more baking spice and monolithic black fruit emerges.

Because Ballard Canyon has the insane 40 degree plus daily swing and walks the fine line between hot and cold climate Syrah, Stolpman can boast a continuum of rich red fruit all the way through to black fruit.

Sourcing from Stolpman Vineyards, Brandon quickly learned that he doesn’t need to constantly taste the fruit at Stolpman to know the perfect picking time. The vines tell him this before he even touches a grape to sample. Because Ruben dry farms the vineyard, and doesn’t pump the vines with water and nutrients, roiding it up to stay healthy and green, the changing color of the leaves indicates when the vine is turning off, hitting the height of ripeness. The appearance of the vines and the fruit profile of the grapes are one and the same. When the vine indicates the end of the road, the fruit will be at its deepest and most intense.

Because the vines aren’t spoiled, the ripening is usually more gradual, allowing the flavors to mature before the alcohol. The alcohol levels were lower than many of Brandon’s other vineyard sources even on the late-picked years of 2009 and 2010. And despite the delayed harvest dates, the flavor profiles boasted fresh red fruit instead of dry raisins. In those early years, it was puzzling to Brandon that he would pick his cooler vineyards before Stolpman, and that’s when he fully grasped the importance of dry farming.

Stolpman Vineyards isn’t an ideal parcel for a lazy winemaker, but it’s not brain science either. As long as Brandon is there to watch the vines begin to yellow after their long fight to ripen fruit without water, he can plan his picking day.

Beyond the vines and into the glass, Brandon delved into the specific profile of Stolpman Syrah. He pointed out what he considers the obvious “Stolpman Signature”: the breadth of fruit flavors from red to black found in Ballard Canyon plus iron, blood, and rust flavors. It’s almost as if the vineyard’s sole is pure red, but there are complicating, complex black factors adding mystery to the place.

And after four vintages, Brandon feels like he is still unraveling the mystery of Stolpman. Part of that mystery, and a key indicator of the unique quality of the vineyard, lies in how the fruit can keep it’s signature through the late years, the frost year, and now the early year.

In the end, Brandon chalks it up to “the right site and the right farming”. He anticipates the 2011 and 2012 Stolpman Syrah lots will once again make the cut into MJM, and he assumes the same will be the case for vintages going forward.