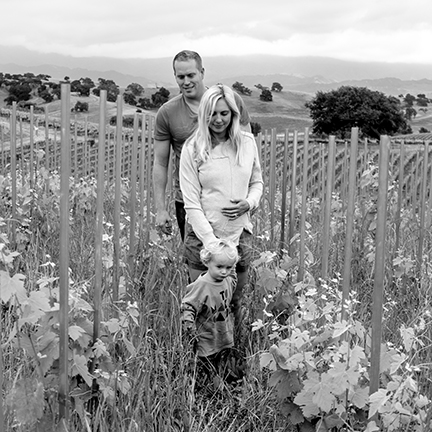 Jessica and Pete met while both working at a Southern California wine distributor.

Pete left their employer to take over Stolpman Vineyards in early 2009. First, he took back the majority of the vineyard for wine production rather than selling the fruit to other winemakers as his father, Tom, had done.  Once his first vintage was in barrel, Pete augmented the Cuadrilla profit sharing program to 10% of all bottles produced.  Never idle, Pete continued improvements in the winery, including custom concrete and carbonic fermenting tanks.  In the vineyard, Pete is most proud of the new 6,000 vine/acre “Great Places” Syrah vineyards.

Back in the early years circa 2009, Jessica supported Pete, financially and otherwise, as he tried to sustain the then fledgling winery.  Once they got married in July of 2013, Jessica left her day job, and took over management of California for Stolpman Vineyards.  Today, she balances running Stolpman’s largest wholesale market with raising Jessica and Pete’s two young sons, August and Otto.  As a little boy, Omar Solorzano called Jessica “La Princessa” and one day soon her own wine project may be announced. 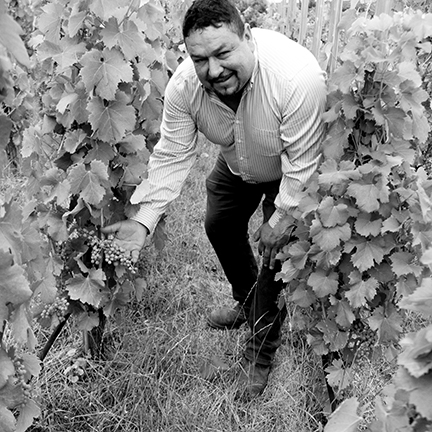 The always theorizing and experimenting Vineyard Manager at Stolpman since 1994, Ruben was crowned “the Grape Whisperer” by Wine Enthusiast Journalist Matt Kettmann.  Via Ruben’s vineyard management company, he controls not only his home Stolpman Vineyards, but also several of the best sites from the Western edge of STA Rita Hills through Happy Canyon.  On top of his natural farming prowess, Ruben is one of the most lovable and loving humans on the planet AND he is August and Otto’s Godfather “Padrino”.

While Ruben farms many different vineyards, his wife, Maria, concentrates solely on the day-to-day operation here on their home ranch, Stolpman Vineyards.  Because of her importance, the Solorzano and Stolpman families named their partnership brand “Para Maria” – for Maria.   Daughter Marissa has become an accountant while Omar is still causing trouble in elementary school.  One often encounters Omar and his dog Rex playing near the Solorzano family home on the vineyard. 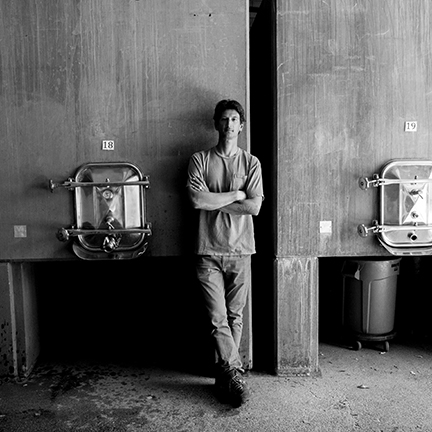 Beyond the years of collective experience head winemaker Kyle Knapp and assistant winemaker Matt Nocas bring to the winery, Matt and Kyle share the same vision of Stolpman’s Holy Grail.  Whether through carbonic So Fresh, esoteric Combe, or the classic Estate – they chase the distinctive purity of the vineyard.  Both their eyes light up when they taste a magical lot.  When not in the cellar you can find them surfing up and down the coast, often with Kyle’s wife Savanna and kids Milo and Andi in tow.   Matt will marry his fiancé Cassie in 2021.

Marilyn put the wild idea of one day planting a vineyard into Tom’s head as they honeymooned in Napa Valley.  As Tom and Marilyn journeyed deeper down the rabbit hole of food and wine, Tom got more serious about the idea.  He started his search for Limestone near the Ocean and found our land in 1988.  He managed to purchase what is now Stolpman Vineyards in 1990.  Still a Lawyer today, Tom managed the vineyard operation in his spare time, and put his full trust in Ruben to optimize the site.  Marilyn focused on Stolpman’s boutique olive oil program.  They both still commute from Southern California up to their home on the vineyard “Villa Angeli” every weekend to enjoy the “fruits of their labor”.